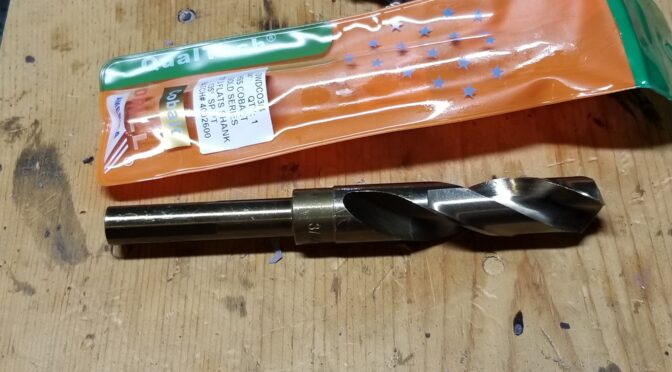 Everyone is trying to save money these days and that includes me. When you start talking about quality carbide end mills and cobalt drills, the costs rack up fast but there are options for you to save money and I’ll make this short and sweet.

I needed to buy a 3/4″ reduced shank cobalt drill bit. These things are usually around $40-50/ea and I was able to get a nicely made Qualtech from Drills and Cutters for $32.91 out the door. I use this bit for drilling out the top of my AK-12 grips and the glass reinforced polymer shreds HSS bits so discount Silver & Deming bits don’t last. Spending the money for a quality bit made from cobalt makes a ton of sense because it will do hundreds of holes before it needs to be sharpened.

So, Drills and Cutters is a web store that you can buy from and they may have the manufacturer ship direct to you. I have found their pricing and shipping speeds very good.

So, if you want to save money, check them out at:

The second group I want to share with you is EndMillDiscount.com. Carbide is not cheap and “cheap” carbide tooling does not hold up. I go through a fair number of carbide end mills and carbide spotting/centering drills each year. When you need to drill hardened steel, there are situations where you simply need the hardness to cut. So, I needed to order in more 1/4″ bits and started shopping around. With the word “Discount” in the site’s name I was a little nervous but they had *really* good prices and I couldn’t find any negative reviews so I took the plunge.

I definitely plan on buying from them again. Visit them at:

I hope this helps you out. 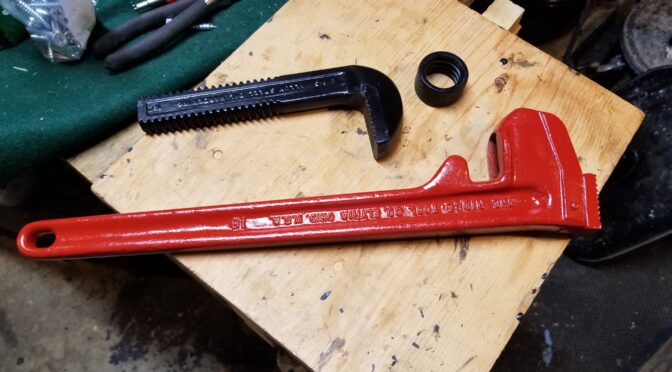 In the last post I told you about removing the rust from the old Ridgid pipe wrench using a solution of apple cider and Prep-N-Ethc. Now we’ll go over painting it. I considered three options – using a durable bake on weapons paint, a spray on epoxy paint or a basic spray paint. I went with the latter simply to save money. It just so happened that I had cans of Fusion All-In-One Gloss Red Pepper and Satin Black Krylon in stock. All-in-one meaning it contained both the primer and the paint.

Krylon is an acrylic laquer and not an enamel. In case you are wondering about the unique name, it comes from the founder’s first two letters of his last name – Krester – and that he was so impressed by Dupont’s discovery of nylon that he dropped the “n” and called his paint Krylon. This was a marketing move because he’d developed the basic formula in 1947 and nylon was introduced shortly after.

I like Krylon because it dries fast. I hate waiting for Rustoleum to dry and that pushes me in the direction of Krylon. With that said, Rustoleum’s enamel paint tends to be more durable. If I had it in stock, I would have used Rustoleum and baked it on.

I took the wrench, disassembled it again and sprayed everything down again with brake cleaner to make sure there wasn’t any oil. A side benefit of acid rust removal is that it does acid etching of the surface as well creating little pockets/surface imperfection all over that give an excellent surface for finishes to adhere to.

When spray painting, you need to be patient. You build up to the final color you want by spraying successive coats of paint. Follow the directions for drying time per coat and the maximum time to wait to apply the next coat.

Because I acid etched the surface, I didn’t apply a primer plus Krylon’s Fusion series claims to have some primer in it. I noticed on the can they still recommended primer for a bare metal but I skipped that. I typically waited 15-20 minutes between light coats based on the instructions on the can. Light coats reduces the risk of runs and making a mess.

Be sure to let the paint have plenty of time to set before you turn it over. Either wait until just before the maximum time before next coats or you will need to wait until the first side fully cures. I would rather try and do it together to get the best adhesion that I can. If it fully cures then you either get a less than ideal bond or you have to scuff it. Some folks will hang their parts to avoid some of this.

So, I put the parts in my curing oven for a couple of hours at 175F to help stuff dry fully and let it sit overnight before reassembly. With enamel, a lot of folks say that baking helps. I don’t think it makes a big difference with Krylon but I do know that it pays to let parts have the full time to cure based on the instructions on the can. If they say 24 hours, give it 24 hours. I’ve ruined a ton of paint jobs being in a rush.

So here is the refinished wrench:

Well, it was interesting to learn about Ridgid and to bring some color back to the old wrench. I’ve already used this to tighten a pipe since I tool the photo. The paint did come right off the jaw as I knew it would but I’ll definitely be using it more in the future and remembering my dad and grandpa who passed it down. 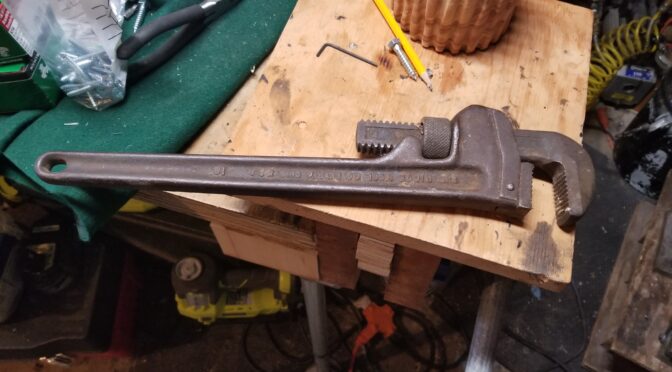 Like so many of my stories, this one begins as so “One day I was in my wrench and ran across and old rusty tool that was still functional”. Let’s start with a bit of backstory.

My grandfather immigrated from Quebec along with his brother to the Boston area to improve their lot in life. They’d grown up on a farm near Compton, Quebec, and somewhere along the line had picked up the skills necessary to service heavy machinery. He’d tell my dad stories of working on various machines who then relayed some of them to me.

My grandfather had a family, including by dad of course, somewhere near Rockport and eventually bought a farm in Derry, NH, sometime in the late 1930s or early 1940s where he raised dairy cattle, grew hay and what not. Along the way he amassed quite a few tools that then passed on to my dad.

One of these tools was a rusty 18″ pipe wrench that I recall my dad using on a number of occasions and when my dad passed away, I got the tools, including this old wrench.

So, I’m in my shop moving stuff and uncover this big 18″ pipe wrench that I then took a lot closer look at. Interestingly enough, it was made by Ridgid.

Ridgid and the 18″ Pipe Wrench

For years I thought Ridgid was a made-up Home Depot house brand. Actually, it was founded in 1923 in North Ridgeville, Ohio, and moved to Elyria, Ohio, in 1943. What got them started was the invention of the modern pipe wrench. In 1966 it was bought by Emerson Electric and today it sells a lot of different tools including hand tools they make, power tools by Techtronic Industries of Hong Kong and Wet Dry vacs made by Emerson.

In reading, guys report the markings as not being very reliable and company records incomplete so the above is really a best guess but it does basically align with when my grandfather would have been buying tools.

So I had a decision to make – leave it alone and let it rust or clean it and apply paint. Well, it’s not like these wrenches are rare collector pieces and this was a tool I would use going forward – seriously, other than being rusty it was good as new.

I considered three options – abrasive, electrolytic or acid. The rust was actually pretty light and I opted to go with acid – notably a combination of apple cider and phosphoric acid.

The first step was to spray down the wrench with brake cleaner liberally to get rid of oils. Next, I put a wire brush in my hand drill and removed all of the loose rust and dirt from the wrench body, nut and jaw.

The acid bath was a gallon of grocery store bought apple cider vinegar plus about a quart of Prep-N-Etch phosphoric acid. Apple cider alone would do the job but I was re-using apple cider and I wanted to make sure there was enough acid to do the job.

Now a trick to really get things done is to heat up the apple cider bath and get it warm – you don’t need to boil it. I don’t bother with a thermometer for this – just hot to the touch. The reason why is that heating up a solution speeds up the chemical reaction. If it’s cooler then it just takes longer and if it is boiling off then you are losing liquid needlessly.

Please remember something – do this in a well ventilated area or outdoors or the condensation will cause exposed steel to rust. It’s a very weak acid solution and while the vapors aren’t something you should be breathing, I would be more worried about causing rust if I were you.

Before I put the wrench parts in the warm/hot acid bath, I really hosed them down with brake cleaner one more time while wearing nitrile gloves. The reason for the gloves was mainly to keep oils from my skin from contaminating the otherwise clean surface. Oil will block the acid. The hot bath will remove some oil but it is contaminated at that point and must be discarded.

I checked it every few minutes and when all the rust was gone, I pulled it out, hosed it down liberally with water and then used WD40 to displace the water and reduce the odds of rusting. This is what WD40 was meant to do – water displacement formula 40.

At this point it was getting dark and I decided to wait until the next day to point the wrench but here’s what it looked like at that point. The next post will be about painting the wrench and the end result.

By the way, I’ve written on using apple cider to remove rust from tools as well as formal manganese parkerizing before this so you can click on one of the links to learn more.