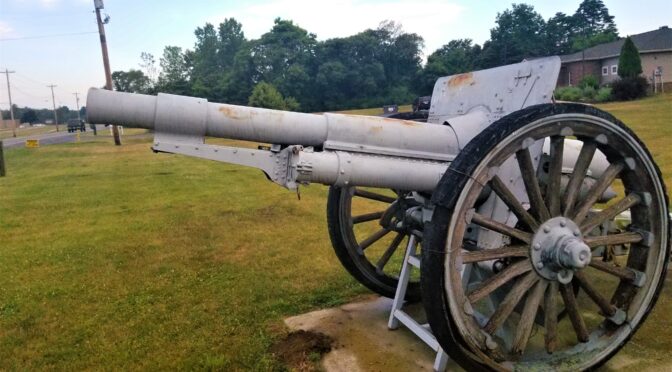 One day when we were driving around, a WWI-era cannon caught my eye. It was positioned in front of VFW post 1137 in Watervliet, MI. Artillery of that era has a number of distinct markings – notably wooden wheels! So, I stopped and took photos – two times actually. One time in the Winter of 2019 and again in July of 2020.

Getting The Clues I Needed To Research The Cannon

In most artillery of this age, you can find what you need to start digging on the muzzle and the carriage. With this in mind, I made sure to get some photos as best I could of the info at those points.

From the carriage, I knew to start my Internet searching on M1906 4.7″ guns and Google immediately returned images, books and blog posts that confirmed that.

Wikipedia gave me some info but then thanks to the Internet Archive Project, I found two scanned copies of US Army books that had lots of old pictures, diagrams and really comprehensive information about the 4.7″ gun. There is so much detail in these books that I am just going to give a quick overview in this post and you can learn more from these books:

The 4.7 inch (120mm) field gun was designed and issued by the US Ordinance department beginning in 1906 with the first units being delivered in 1911. It was manufactured by the Northwest Ordinance Co and carriages were made by three firms groups: Rock Island Arsenal, Walter Scott Co and Studebaker Co.

Apparently there were logistical problems with the unique ammunition it used resulting in limited numbers being built. Despite larger orders being placed, only 209 guns and 470 carriages were produced. 64 of the units were sent to France. 994,852 of the 4.7 inch shells it used were produced. Most of the units were used for training and the guns stayed in reserve storage until 1932. [Source – Wikipedia]. Note, that Wikipedia link is pretty cool for a quick high-level summary of the 4.7″ gun.

The photos below were taken on the two different visits mentioned above. If you click on one, you can see the full-size photo and navigate around as well.

I’ve heard from guys who grew up in this area and they tell me the gun moved around some over the years before landing at its current location in front of the VFW post. If anyone has more information, I’d sure be curious to hear it.

With that said, I now know a little bit more and hope you found this post interesting.