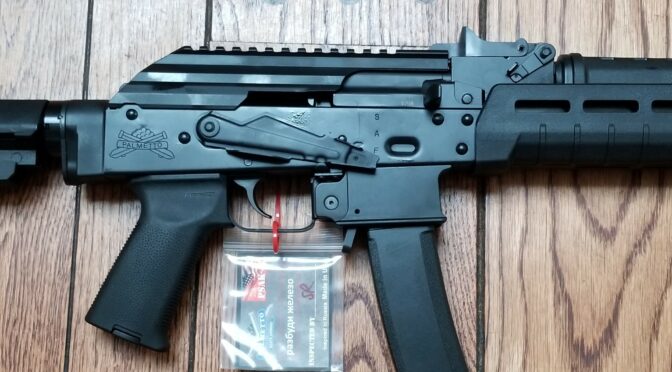 Well, I bought a Palmetto State Armory AK-V in 9mm. I’ve been a PSA AR fan for years and years. I’m not even sure how many rifle and pistol kits of their’s that I’ve built. On the other hand, reports about their AK attempts kept me away from that product line until recently.

PSA responded to the market and brought out a 9mm pistol caliber carbine (PCC) using the AK platform that they called the “AK-V”. In a ways, they took the Russian ideas behind the 2004 Vityaz-SN as inspiration and created their own unique weapon.

Now, they did have some bumps when they launched. Guys identified a number of weaknesses and then PSA did something that not a lot of folks expected – they went out and fixed them and improved the AK-V design. Kudos to them – seriously. What has resulted is a red hot product that is pretty hard to find.

So, before I get into what I did, here are some videos that started me down my journey including some updated videos.

Rob Ski has fired 3000 rounds through his as of July 11th with no major problems. He reported one CZ magazine not a PSA magazine. My response – just use PSA’s magazines. He was dropping it on rocks too! The bolt, buffer, chamber and internals all looked fine. No deformations or marks. Rob doesn’t mince words and likes what he is seeing.

They did a lot of shooting and said they are extremely happy with the performance of the gun now.

I did a lot of lurking reading reviews and comments on Facebook and what not. Watch these videos – these guys are impressed. My next post will have a bunch of photos and first impressions.

By the way, click here to go to the main Palmetto State Armory akv page. They have listings of all their models and accessories

This is a four part series on the PSA AK-V 9mm: