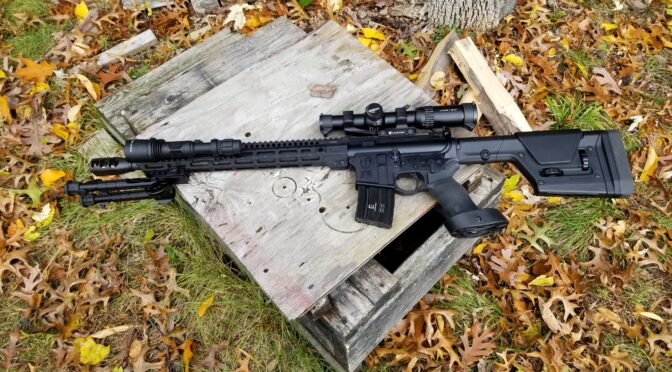 Okay, so I built my first .50 Beowulf rifle in 2018, spent a lot of time planning out the recoil mitigation and documented the adventure – click here for the post. At any rate, I sold it to move on to fund other projects but ran into a problem – I missed the ‘Wulf. There are some bragging rights when you say you have a .50 caliber rifle even when you explain it’s not the .50 BMG round. So, I decided to build another one and make it pretty unique. It’s the Alpha, or the dominant Wulf in my mind.

The first thing I want to point out to folks is that the 12.7x42mm is the generic designation of the .50 Beowulf round and is mainly used by firms who don’t want to get into intellectual property issues with Alexander Arms (AA). If you look on Gun Broker and do some searching with Google you will turn up tons of listings for complete 12.7x42mm uppers starting just over $300. … Let me put this delicately – I would recommend that you avoid them. You will get what you pay for either in terms of performance out of the box or over time. If you do some searching you will read that I wasn’t the only buyer who had issues with Radical Arms uppers for example because of the wrong bolt being used.

If you do buy a cheap 12.7×42 upper, I’d recommend you test it right away before the warranty expires. I’m sorry – I just don’t have much faith in them.

This time around, I decided to use an actual Alexander Arms (AA) upper and not screw around with cheap stuff. The only problem was that I wasn’t really sold on the handguards of their complete units. That and the prices were a turn off the last time. As I looked down the AA page, I saw they now sell a “.50 Beowulf Upper Kit DIY” that had everything except for the barrel nut, handguard and brake of your choice. They have both 12″ and 16″ barrel versions of the kit. As much fun as a 12″ howitzer would be, that didn’t interest me as much as building a new rifle using a 16″ barrel.

To sum up the AA upper, they make this build real easy. For me, building an AR is like building with Lego parts from different kits to make something unique, which was exactly my plan with this new ‘Wulf. Next, I am going to skip the upper for a minute and tell you what I in terms of the lower receiver. Why? Well, I’m a creature of habit and always build the lower first and then the upper.

An Overview of The Lower and Parts Used

I thought about using an existing AR lower from another rifle but I decided to build one from scratch. In case you didn’t know it, a Beowulf upper is actually designed to work with any 5.56 AR lower without any modifications being needed to the lower itself – same trigger, buffer, etc. The magazines are slightly modified but we’ll return to that later. So here are the parts details for the lower assembly:

A Beowulf uses a standard lower so there really isn’t anything special that you must do. Thus, I’m not going to do a complete part by part instruction just for this rifle. Here’s a write up I did a while ago while building an AR pistol, which is pretty similar other than the use of a brace with a pistol vs. a stock with a rifle:

I always found having multiple perspectives to draw on can help. Here are two excellent written resources for you if you are new to building lowers:

If you would like to see it being done as well, here are some links. First, here is Larry Potterfield at Midway with a solid video on building a lower:

Brownells also has a ton of training videos online that cover building the AR-15 overall. If you click here, you can then select whatever videos you want to watch.

Okay, so you have an idea of the Alexander Arms DIY .50 Beowulf Upper upper I bought and the lower parts plus assembly. In the next post, I’m going to give you some tips/observations that I had when assembling my lower. I’ll add a link to the new post here as soon as it is complete.