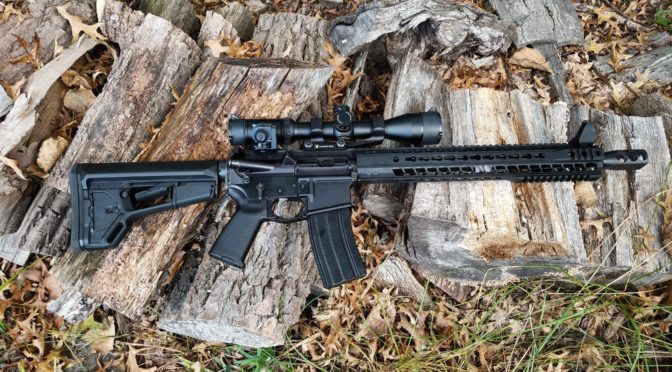 When I first heard of the .50 Beowulf cartridge, it got added to my bucket list immediately. What’s not to like – the ballistics of the .45-70 cartridge in an AR platform that hits like a freight train. Somewhat humorously, I’d also point out that it drops noticeably at 150 yards and like a pumpkin after 200 yards but boy, does it hit hard when it does.

I have fun assembling AR lowers the way I want them and figured I would save time and get an assembled upper. In early 2016, I looked at two different vendors of assembled uppers – Alexander Arms (AA), who was the originator of the cartridge, and Radical Firearms, a discount AR rifle and assembler of uppers and lowers in Texas. A basic AA upper was around $719 that did not have a brake (or threading) and basic handguards. A decent looking Radical unit in the generic 12.7×42 chamber was only $598. It seemed like a no brainer and I went with the Radical unit.

To jump ahead just a bit — I wish I had bought a better AA upper for $923-1190. The Radical upper caused me quite a bit of grief and I am going to chronicle my adventure here because I did get it to work out in the end and was very happy with the results but I had to work for it.

When I first ran across Radical, I had high hopes. In an impulse buy, I purchased two 5.56 uppers and the 12.7×42 upper. In case you are wondering why I am listing 12.7×42, that is the generic designation for the .50 Beowulf cartridge that AA owns the intellectual property for. By using the metric designation, Radical could build an upper without paying anything to AA.

When I bought my uppers, Radical was undergoing a huge growth spurt and I had to wait some period of time (4-8 weeks maybe) for the uppers. That was not a big deal to me. The AR uppers arrived and while gritty and needing polishing, they worked.  Basically, what you’d expect with relatively low cost mass assembled products.

The 12.7×42 upper was a different story. Sometimes it would cycle and sometimes it would not. Radical took forever to respond to emails and what not so I figured screw it, I’ll just treat the assembled upper as a collection of parts and move ahead. To be perfectly clear, I parted ways with Radical and did not give them a chance to fix it after I got frustrated by how everything was going.

So, I started researching on the web and found that Beowulfs use a bolt head that is slightly different than a 7.62×39 AR bolt. After cycling my rifle by hand over and over, I concluded the cartridge was not seating properly in the bolt face and ordered a true .50 Beowulf bolt directly from Alexander Arms (not Radical). Problem solved. It’s run perfectly ever since. Whether Radical installed the wrong bolt or an out of spec bolt, I don’t know. I threw the offending bolt in the trash and called it even,

Another irritation Radical caused me was when the handguard loosened up because they hadn’t used Loc-tite on the screws. My recommendation is to just use Blue Loc-Tite if you run into this – it worked fine for me. I like the handguard otherwise.

The one thing they got right was the barrel. I heard Satern made the barrel but don’t know for sure. It is wonderfully accurate with the big 350gr XTP hollow point cartridges that AA makes. I am very pleased with that combination.

Yes, I eventually got it to work.  No, will not buy from Radical again but I definitely would buy more stuff from Alexander Arms.  I dealt with them on the phone a few times for ammo as well as the website.  The staff were pleasant to deal with and shipping was always prompt.

I was not impressed by the muzzle brake that Radical supplied and started researching the best brake for the Beowulf. Bear in mind the muzzle has a pretty unique thread at 49/64″-20 threads per inch (TPI).  In addition, I knew I would need a jam nut to address the timing so the brake could be level on the barrel and it needed to be steel and not aluminum.

To make a long story short, Timber Creek makes a Beowulf brake that does a great job. It seriously cut the recoil back and made the biggest difference of all my modifications.  They make them with two different threads so make sure the one you order matches your rifle.

Here it is on my rifle – notice the big ports that redirect some of the gasses backwards:

Added a Limbsaver Recoil Pad to the Magpul ACS Stock

Limbsaver makes great recoil pads – I discovered them some years ago and have used them on a number of rifles and shotguns over the years. What is cool is that they also make a recoil pad specifically for the butt plate that the Magpul CTR and ACS stocks use – plus some other models. I like ACS stocks so it was a no-brainer for me to get this thicker spongy pad to help absorb recoil.

The next important element I did to reduce recoil was to add a mixture of bird shot and epoxy into the compartments of the MagPul ACS stock. I just stirred up a mixture of #7 lead bird shot with epoxy, filled all the voids I could and wiped off the excess liquid epoxy checking all the seams until it gelled enough. Here, you can see a hint of it sticking out.

Another benefit is that it really helps improve the balance of the rifle because otherwise it is very nose heavy. Quick comment – use a quality name brand epoxy and the longer it cures the better it will hold up over time. Personally, I use Brownell’s Acraglas for the majority of my firearm and knife work.

The last thing I did was to try different buffers. Bill Alexander designed the cartridge to work with a normal AR buffer. I went from a normal/H1 buffer to an H2 and finally to an Enedine Hydraulic buffer, which is in it right now. With each step, the recoil seemed to go down a tad but did not make a huge difference.

I was thinking about using the rifle either for hogs or deer so I wanted a scope that could go from a fairly wide field of vision at 2.5x all the way up to a decent zoom at 10x. Vortex is always my first choice in scopes so I bought a Viper PST 2.5-10×44 scope and Vortex rings.

This is a wicked combination. I have thoroughly enjoyed this scope on the Beowulf. It holds zero and is nice and bright.  You can’t go wrong with Vortex scopes in my honest opinion. Because of the Beowulf’s recoil, use quality rings and be very sure to torque all the screws down to spec so the optic stays put.

By the way, you may scoff at the notion of buying quality rings.  A lot of the cheap imported rings are just aluminum.  You’ll notice they don’t list a torque spec.  Quality rings such as the ones fro Vortex will tell you a torque spec to hit and they often have steel inserts for the threads.  You get what you pay for.

The Beowulf actually can use easily modified standard 5.56 aluminum magazines.  Click here for a blog post about the easy procedure.

The rifle turned out great.  The final “felt” recoil was about that of a 20 gauge slug gun, if that.  I could shoot round after round without regretting the kick 🙂

I had fun building and shooting it. As I get older the more I realize I enjoy learning about the engineering and history of arms. The “Wulf” has a new owner now and I hope it serves him well.