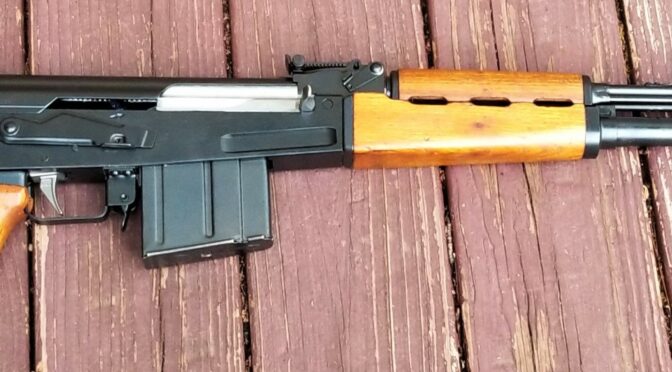 In 1975, Zastava Arms was approached by the Yugoslavian military with a need for a designated marksman’s rifle (DMR) that was semi-automatic and fired a full power round. Rather than license the Dragunov design, Zastava took a similar path that the Romanians did with the PSL – they took the base Kalashnikov design and scaled it up to handle a full size rifle round that they already had. In the case of Zastava, they chambered the rifle in 7.92×57 (8mm Mauser round). This put the effective range for human sized targets out at about 800 meters (875 yards).

The M76 is an interesting beast. When you pick one up, the first things you notice are that it is both heavy and long. Zatastava opted for a stiff, albeit heavy, milled receiver and a heavy barrel profile. The published statistics for the rifle put the weight at 4.6kg (10.14 pounds) – definitely not light. The barrel is 550mm (21.65 inches) long and the overall length is 1,135mm (44.69 inches).

This is where I enter the pictured. In 2006, I saw a photo in Shotgun News of an 8mm AK and thought it was a mistake! Over the years, I both learned more about the extended family of firearms based on the Kalashnikov design, the more I came to really like the Yugoslavian branch of the AK tree. I also very much wanted to own a Yugo M76 but a combination of budget (or lack there of) and reports of quality control problems by commercial US builders held me back.

A few things all came together to get me to finally move on having an M76. First, I got to know Two Rivers Arms over the years both by selling grips to them as well as their building some M72B1s for me. I knew they would do exceptional work. Second, TortOrt released their 80% Yugo M76 receivers and Tim at Two Rivers told me he could work with one of them. Third, I was able to source a complete kit with no furniture but a Green Mountain barrel from Apex and bought a complete Yugo M76 kit from Ivan Drago on GunBroker that did not have the barrel or the optic.

I need to mention something here – I just am not a huge fan of the offset scopes that the Soviets and Communist Bloc (ComBloc) countries came up with. I prefer something low, centered and … modern (gasp). When I talked to Tim at Two Rivers about my plans to not go with the traditional ZRAK 4x optic he was surprised. I already knew I wanted to use one of RS!Regulate’s mounting systems because they are simply the best most adjustable mounts out there. My first thought was to replace the factory optic rail on the receiver with more on an AKM style but we found out that the RS!Regulate AK-303M would have enough adjustment that we could use the factory rail. So, I ordered in the AK-303M lower rail and the AKR upper – RS!Regulate mounts are two piece so you can really dial in what you want.

By the way, on the RS!Regulate parts, either buy them direct or from a reputable vendor – not eBay or Amazon. There are cheap Chinese knockoffs/counterfeits that are for sale and not only is the quality poor but you are taking money from the small business who put in the hard work and money to make these.

Eventually, all of the parts arrive, I packed them in boxes and sent them to Tim at Two Rivers. Then the waiting part happened. With top notch builders, they are backlogged with work. In my case, I asked them to put the project on hold at one point, so all said and done, it was just shy of two years before schedules aligned and the rifle was completed. When Tim called to tell me he was wrapping it up after test firing it, I was pretty excited to say the least.

Out of the Box Impressions

Tim sent the rifle to my friend and FFL, Scott Igert of Modern Antique Firearms and as soon as it arrived, I went over to get it. Scott and I pulled it out of the box. Wow , was it big and cool. The diameter of the barrel was actually surprisingly big.

When I got home, I measured it. The rifle was just under 44-3/4″ long from the tip of the compensator to the top of the recoil pad on the buttstock.

Weight of the rifle without a magazine was 9.86 pounds. It was 10.42 pounds with an empty magazine. I instantly liked the heft as I like heavy rifles and the balance was pretty good. Granted there is a mile of heavy steel in front of the receiver but it was pretty decent.

Here are some photos of the base rifle. You may notice the trigger is silver – I did install an ALG Ultimate trigger (my hands down favorite AK trigger now) before I took these shots and will write up some of the modifications in following posts.

I will be writing up my journey in upcoming posts and hope to take this rifle to the range in the near future. Definitely a big shout out to the gang at Two Rivers Arms for another wicked build! Thanks guys!