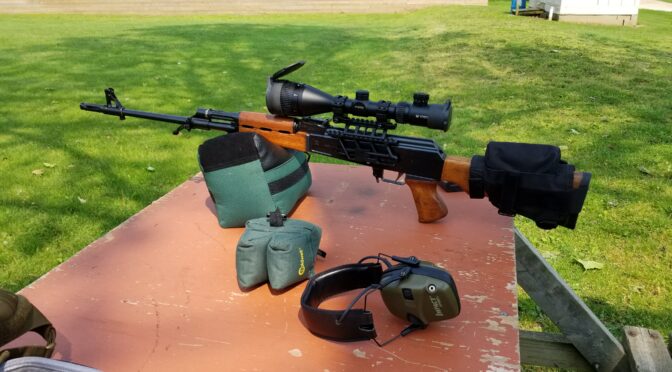 I finally got a chance to take the Yugo M76 to the range and my youngest daughter went with me although now that she’s in college she’s gone a lot. I do have fun when she’s home as she loves shooting also and knows her way around a rifle.

We set up at 100 yards and I did the initial test firing and sighting in of the rifle. Function-wise, it was great. We did not have a single failure to feed or eject the whole day.

By the way, my daughter is wearing MPOW 035 ear muff hearing protectors and she said they worked great. She wore them when we were shooting the M76, my .338 Lapua and 9mm Glocks. They are excellent not to mention a good deal. I have three sets of them now for her and others. I am still using my Howard Leight by Honeywell electronic ear muffs.

Both of us were wearing NoCry safety glasses. I use ones that go over my prescription eye glasses and my daughter wears normal ones because she has contacts.

One thing the slowed me up a bit was that the laser bore sight didn’t really help me out much. I have a new one from Wheeler that works great on the actual muzzle end of rifles but it would appear the M76’s brake was not truly perpendicular to the bore. Normally it is pretty slick but at the range, I had to fire a number of rounds to even get them on the backing board first and then finally to the bullseye.

We were shooting S&B 196 grain SPCE ammo. My groups were about 1.5-2″. I’ll get back down to the range one of these days with my better rest so I can test the accuracy. I have some Hornady Vintage Match ammo too that has cool specs but since I didn’t have my bench rest with me, I largely saved it for next time and will explain why I said that in a moment.

The only problem we encountered was the firing pin piercing primers. We went through almost 40 rounds and about a third had pierced primers. This is a known issue with M76s and, yes, the rifle is headspaced properly.

At first I thought it might just be the S&B ammo so I tested it with five rounds of Hornady Vintage match also. I think two of the five Hornady rounds were pierced. At any rate, here are some photos of the S&B ammo.

There are a lot of posts about the piercing and cratering of primers with the M76. I’m pretty busy right now but will read all that I can before I do anything.

Second, I want to compare how close the firing pin hole is to the firing pin on my other M76 bolt plus some of my AKs. I don’t think it looks unusually large but it should be investigated.

Third, I have a hypothesis – I think the firing pin needs more of a rounded radius. The current face of the firing pin is relatively flat. There were literally little punched pieces of primer laying on the firing bench that were flat and the primers that intact showed a very flat impact.

I’m not going to rush into anything. I do have a second complete bolt assembly that I can look at and scavenge from if need be. If you have suggestions, contact me – info@roninsgrips.com.

We had a lot of fun. The rifle performed very well with no feed or ejection problems, no magazine problems and only the pierced primers were minor issue.

I definitely look forward to shooting this rifle with a better bench rest and also comparing it side by side with my .308 M77. Also, I’ll report back on what I try to correct the firing pin piercing or cratering primers at some point in the future. Until then, have a great day!