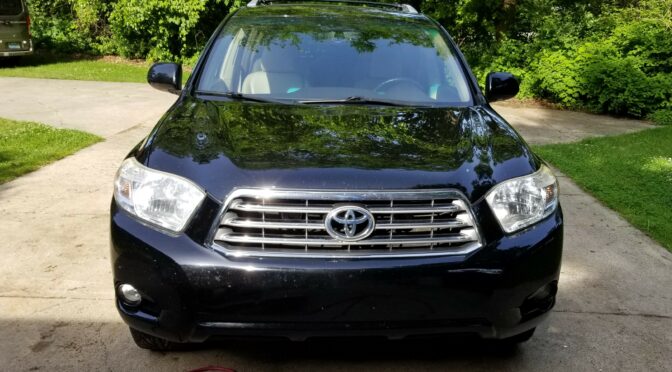 We recently became the new owners of a 2008 Toyota Highlander. It was in great shape and I thought we got a pretty good deal on it. The previous owner disclosed to us that the hood alarm switch was flaky and the car alarm would go off randomly.

After we bought the Highlander and returned home I did some research that night. There is in integral microswitch in the hood latch assembly that detects if the hood is open or closed. The alarm system will not arm if it detects that the hood is open and it will sound an alarm if someone tries to open the hood. Uhm… ok. My first thought was “you can only open it from the inside lever that is protected by the door alarms so why have this one?”

Unfortunately, or fortunately depending on your perspective, the switch is a known problem. It’s also one of the rare times where I will say Toyota did a bad design. Putting a basic microswitch in the front of a car where it will get wet all the time and corrode, not to mention the impacts and grease/oil from the latch itself, is not really that good of an idea — at least not to me.

After reading and watching videos, it seemed like there were three options:

I’d like to point out that just unplugging the sensor is not an option. Doing that will make the computer think the hood is open and the car alarm will not arm at all. This means you must pick one of the three options listed above. I opted for the last one – I bypassed the sensor by creating a loopback plug – a fancy term meaning I joined the input and output wires together thus making it look like the switch was always closed so the computer would think the hood was closed regardless of whether it was or not.

If you’d like to learn more about diagnosing the problem, seeing how to remove the latch and/or how to replace the microswitch, click here.

What I want to do next is walk you through what I did. If you are not comfortable with basic wiring, I’d recommend against your trying this just to be up front. Always ask yourself if you can reverse what you are about to do or can you recover if something goes wrong – if the answer is “no”, then don’t do it. For example, don’t cut wires off right next to a fitting – leave yourself some pigtails in case you need to reconnect them.

One last comment – these directions are just based on my 2008 Highlander. Different years and models may not be like this. Research your vehicle before doing anything like this.

So, to bypass the sensor we just need to create a circuit that normally exists when the switch is closed. First, I needed to get a better look at the location of the wiring so the cover needed to come off.

I did not take as many photos as I should have so let me explain. With the plastic cover off and the middle anchor clip removed, I had plenty of access to the switch and wiring to see what to do. The wire assembly runs from the hood latch – and there is only one wire – do not pick the hood cable used to open the hood. The wire runs from a small switch in the latch assembly and then plugs into a connector shortly below it.

I inserted a small blade screw driver to release the plug from the socket. To be safe, make sure you confirm the wires that you plan to cut lead up to the sensor and are *not* the wires going to the harness / wiring loom.

Why care? Because if you cut the wires on the sensor side and connect them together, you can easily replace the hood latch assembly and go back to having a sensor if you want. However, if you cut the wiring loom, it’s gone. You can manually splice in but it simply is not an elegant approach.

Note I am saying wires and when you look at the plug it looks like just one black wire. What you are seeing is the insulation tube that is black. Inside are two thin green wires that run from the plug to the sensor switch.

Once I was certain which wire to cut, I reached in with some snips and cut the wire leaving a couple of inches to work with. DO NOT CUT THE WIRES FLUSH TO THE PLUG!! You need a short length of the wires to connect together to make the circuit loop back.

To make work easier, I took the short wire with the plug on it and worked at a bench where everything was handy, I stripped a bit off the end of each wire, twisted the bare wires together, soldered them, bent them over the small wire pigtail and then used heat shrink tubing and electrical tape to secure everything. Total overkill but I never wanted to bother with this again.

I installed the newly created loopback plug back into the socket. I then tested the system by turning the alarm on with the key fob, putting the key fob out of signal range in the garage and waited for the system arm. Once the alarm indicator light went solid on the dash, I simply reached in through the open window and tried to open the door from the inside and the alarm went off. Yeah, I had to run back to that fob to shut it off 🙂

If the system thought the hood was open, it would never have armed by the way. That’s why you can’t just unplug the switch. I then reinstalled the plastic cover by installing the clips and then pushing the middle piece down to lock it in place. By the way, remember that the right two clips are bigger than the others. The two 10mm screws went back in with a dab of non-seize on each just in case they ever need to come out again.

That was it – the alarm is happily armed and protecting the Highlander as I write this and not one single false alarm since. I hope this helps you out.