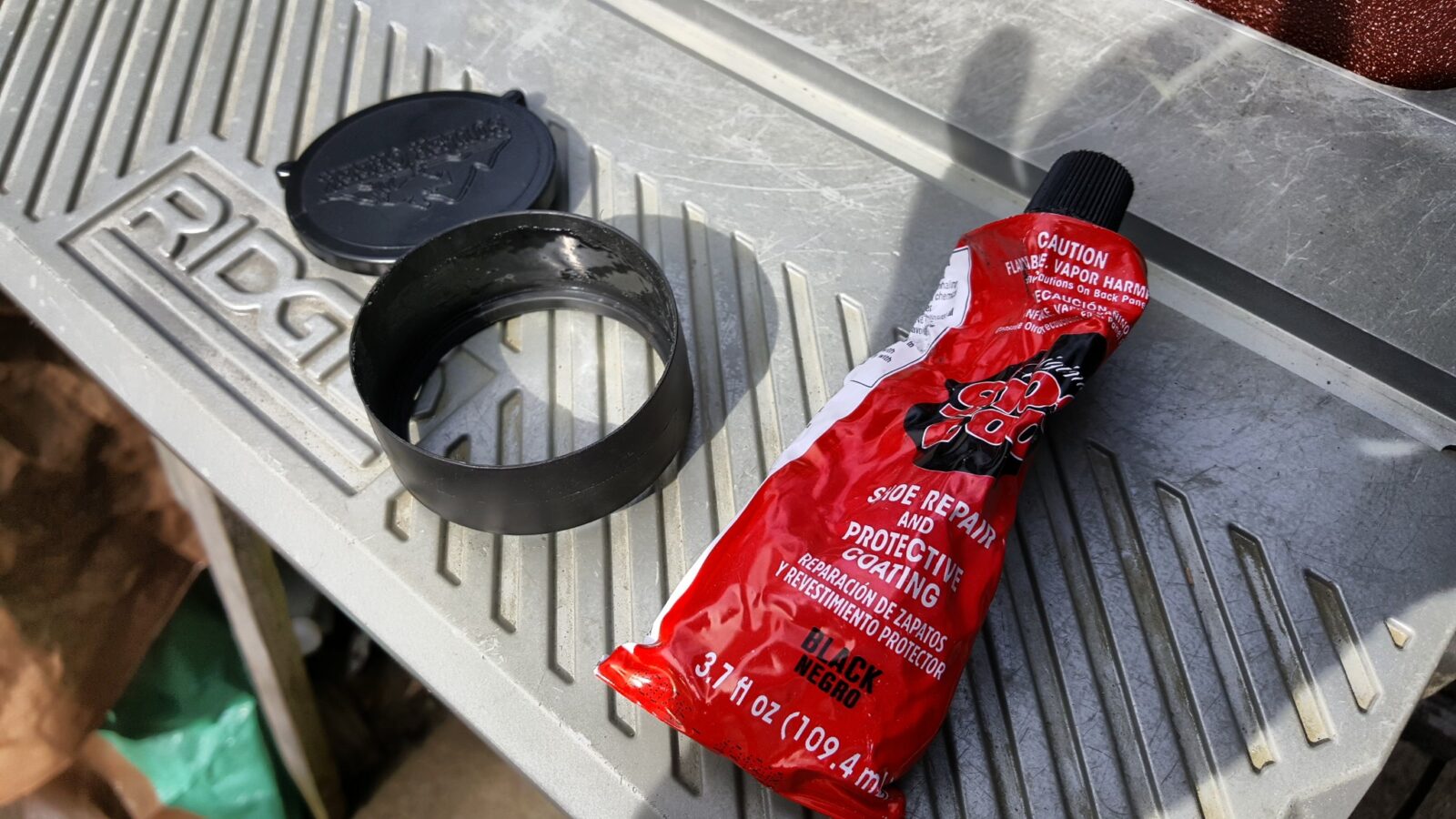 I like flip-up scope caps and, in general, I have had very good luck with Butler Creek.  Recently, I bought a scope cap for my Hawke air rifle scope’s front objective and the thing wasn’t tight enough to stay on when I would flip it up.  There’s a very simple way to fix a loose cap that I want to share.

This isn’t a magical fix – you do want a cap to be real close to the size you need.  In my case the cap was just a hair too big.  For the “fix”, remove the objective and smear a bit of black silicone RTV glue (Black Goop works too) around the inside of the cap and let the glue fully cure with the cap off the scope.  DO NOT STICK IT ON THE SCOPE WHILE WET!  You are using the glue to add mass and fill the space – you do not want to glue your scope on.  I let my dry overnight and the problem is always fixed.

Here is the lens cap and I used black Goop on this one and let it dry & cure all the way before I reinstalled it.  It’s nice and snug now. 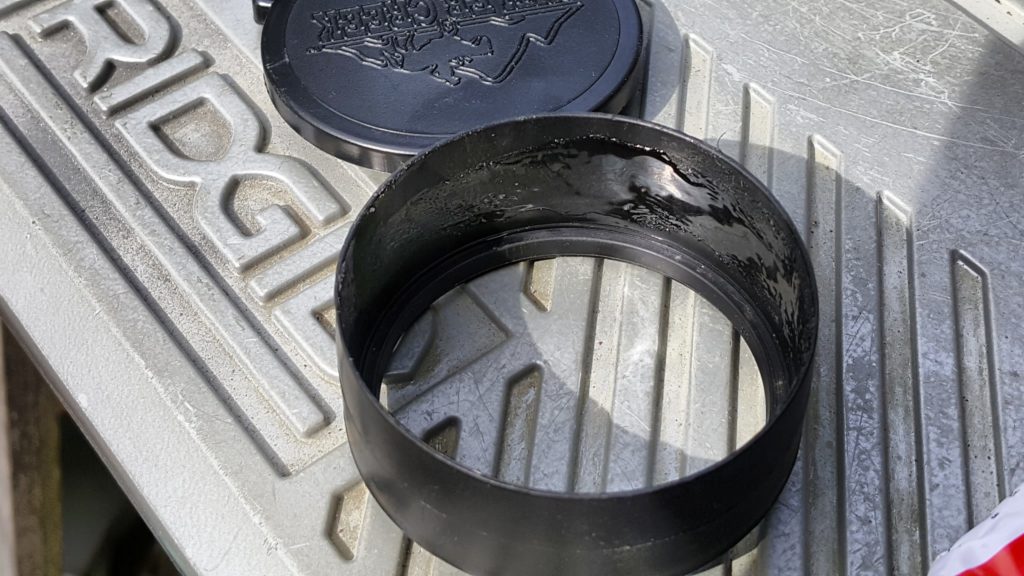 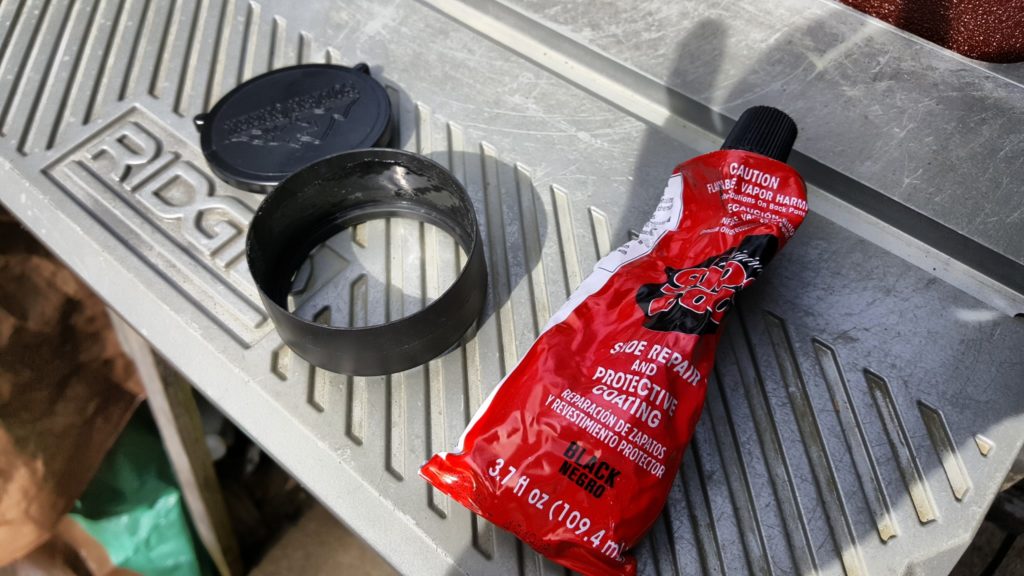 Here’s the finished product on my Galadius: 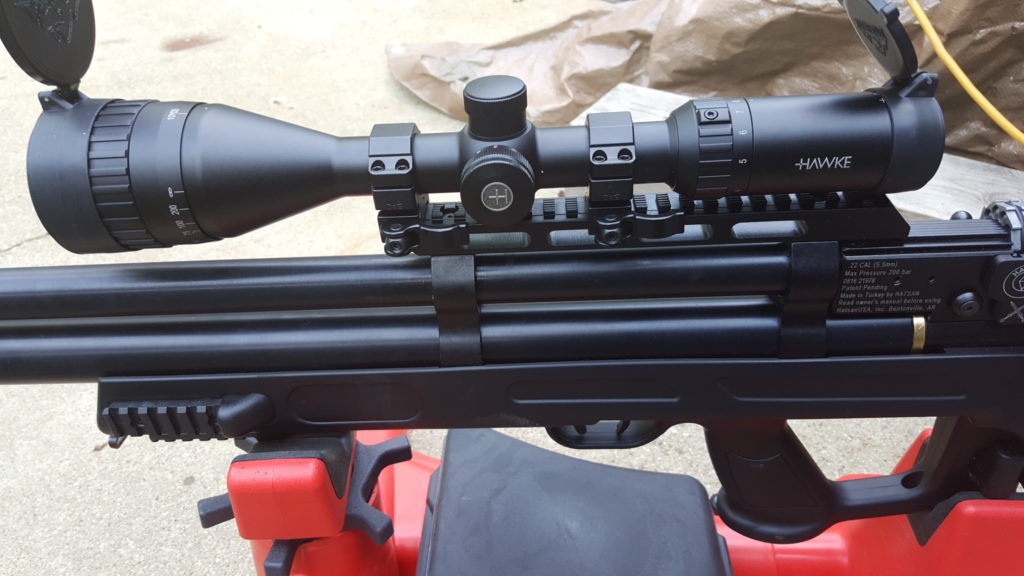 I hope this helps you out.  I prefer black just for looks but you could use any color of rubbery cement you have – just keep it inside the cap out of sight.  What I use more than anything is Permatex Black RTV just because I keep in stock for repairs. 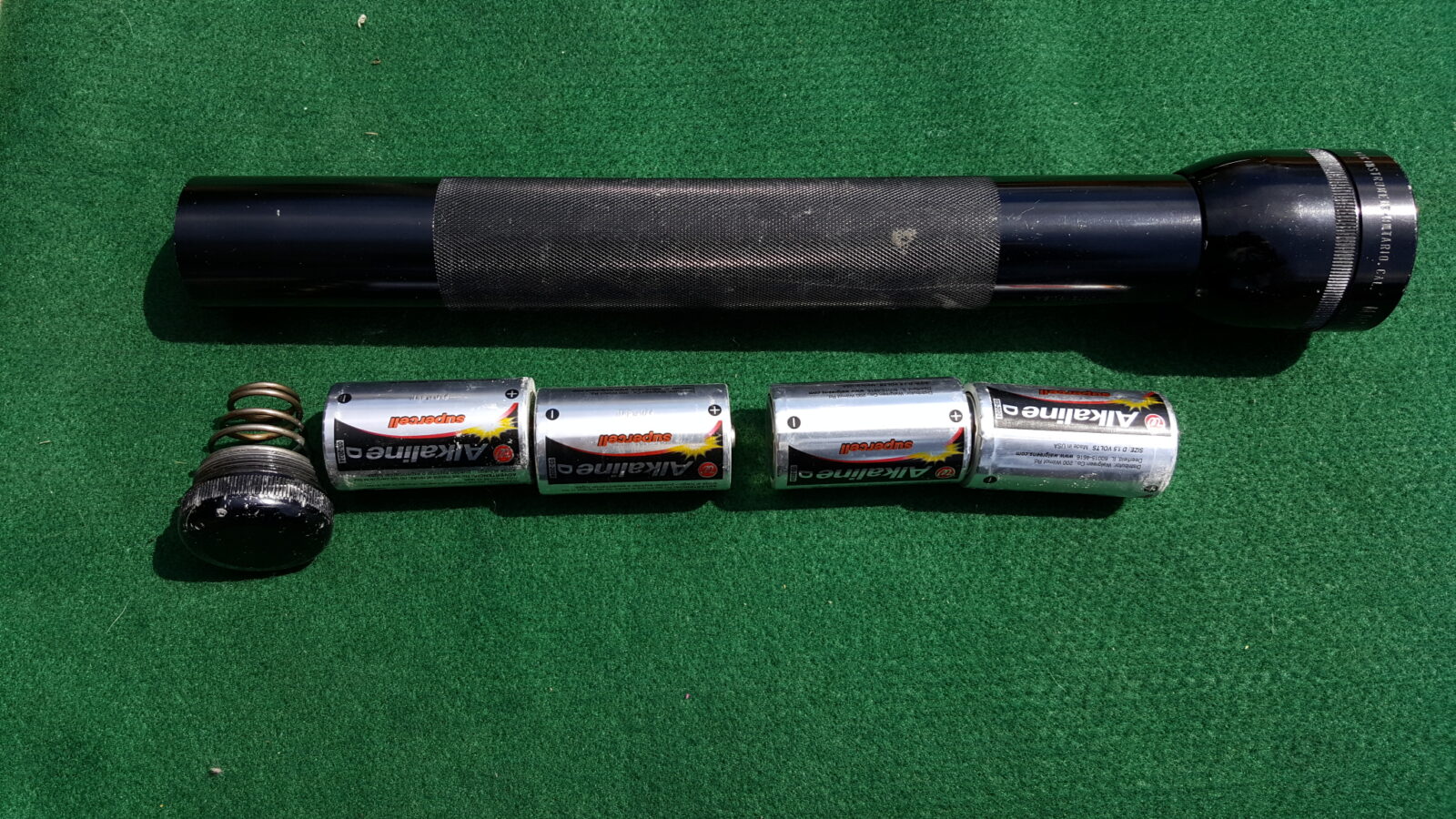 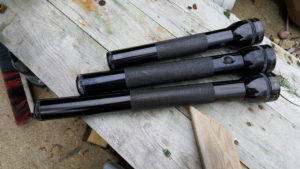 Back in about 1982 or 83, I saved my money up in high school and bought a seemingly giant 4-D cell Maglite.  That thing has been all over the US with me – camping, in cars, trucks, by the night stand and so forth.  My dad was so impressed he bought both a three and five cell version and used them on the farm.  Fast forward to 2015, my dad had passed away and I had both of his lights plus my old one – the paint was chipped and the old-style bulbs didn’t crank out anywhere near the light of a modern LED flashlight but they were still operational.  Face it, Maglites were built to last!   My Maglight and my dad’s were just sitting on the shelf and I couldn’t bring myself to toss them.

As so many things go in life, I was researching on LED upgrades for Surefire M951 weapons lights and wondered if some kind of upgrade existed for Maglites.  The answer was a resounding “yes”! There were all kinds of replacement and upgrade parts available.  I wound up getting three TerraLUX TLE-6EX MiniStar5 140 Lumens replacement for the traditional bulbs in May 2015.  Because I am writing this almost two years later, I can tell you the bulbs are a great deal – they’re not very expensive, bright as heck, durable and really easy on the batteries.  I was impressed then and still am now.

At any rate, two years later,  zero problems, way brighter and better battery life – sounds like something worth sharing while I drink my morning coffee.

First, the Maglite design is really cool.  You can readily get to just about everything that can wear out.  You don’t need to pull the batteries unless you want to, but you do need to unscrew the head and remove it.  Years ago I had a battery burst in this light so I always check batteries just to play it safe.  This is my four cell that I’ll take apart: 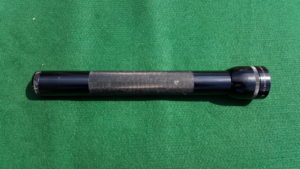 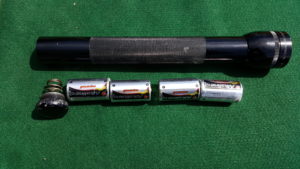 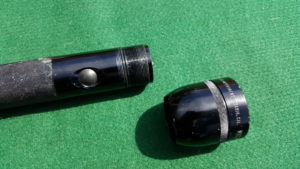 Now, you unscrew the front bezel and that gives you access to the lens.  I am pretty sure I tossed my original because it was so scratched up.  When I upgraded the LED, I also put in a new Crystal Glass upgrade lens in.  I just did it on mine and have had zero problems with it.  When you take the bezel off, the lens just lifts/falls right out.  There’s no glue to deal with. 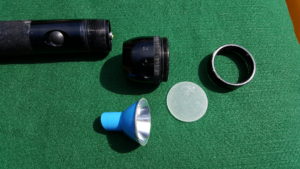 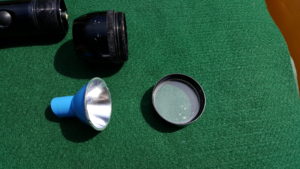 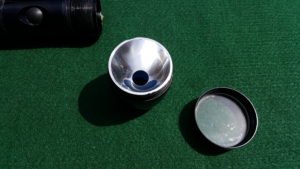 Now the lens  sits in the body on a shock absorbing system.  I found an old bulb and inserted it so you could see the steps.  The bulb is held in place by a threaded collar that simply unscrews and you can then remove the bulb unit.  In the third and fourth photo, you can see the collar to the right of the bulb. 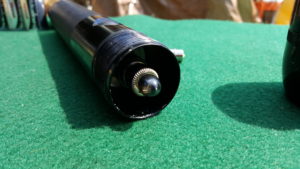 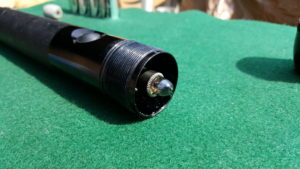 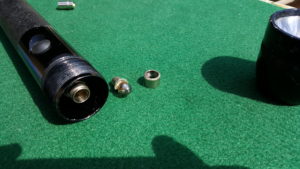 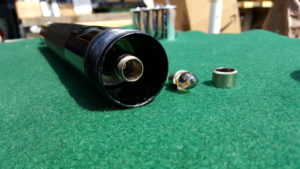 The LED emitter is a tad longer than the bulb but this doesn’t matter.  Just put it in place of the bulb and then screw the collar back into place.  Just snug the collar – you don’t need it to be crazy tight.  Also, I inspected all the O-Rings and out a light smear of heavy silicone grease on all the threads and O-rings to make everything turn smoothly – you can still change the beam from flood to spot, same as always.  Note, if an O-ring is torn, cracked or looking bad, take it to your local hardware store and replace it. 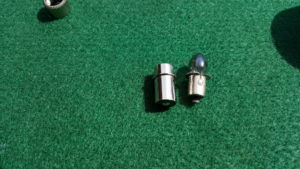 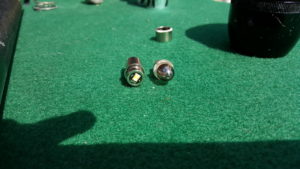 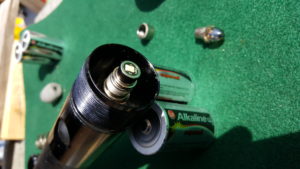 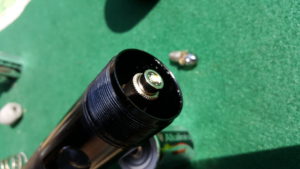 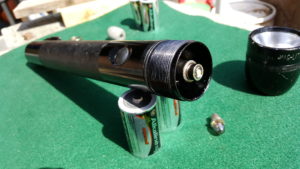 Next up, the rubber cover on my light’s switch was cracked and oxidized.  You can find replacements for those as well.  They are simply press fit so you can remove them very easily with your fingers or use a small tool to lift the cover up.  The replacement I bought in 2015 still looks like new. 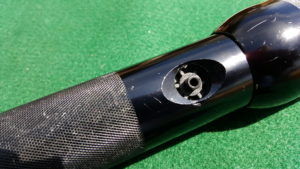 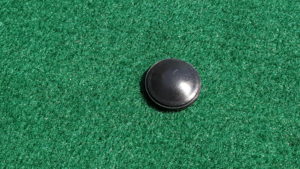 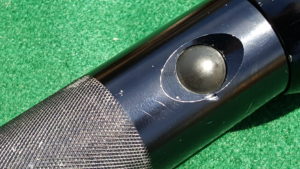 The result:  I spent about $30 and have a very bright durable light.  I keep one in my truck and the other big light floats around between my shop and the house.  In the next photo, you can see the LED emitter working. 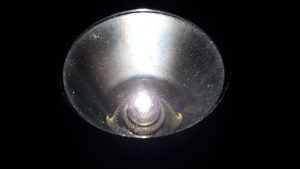 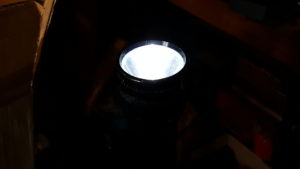 One thing that is interesting is that the five cell’s LED is not as white as the other two but it used to be.  I’m not sure why – I think it has the original batteries from two years ago.  It’s something else to add to the need to check out when there is free time list 🙂 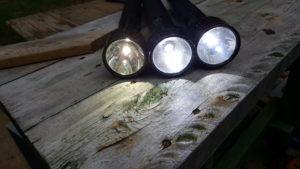 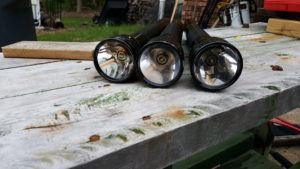 Would I do it again?  Absolutely.  I like being able to use these lights once again.  There’s a lot of nostalgia involved with both of them.

5/23/19 Update:  Still working great.  No problems and has been used a ton not to mention bouncing around in my truck through the winter. 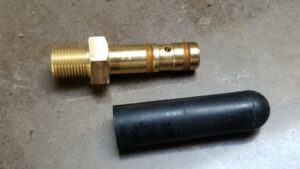