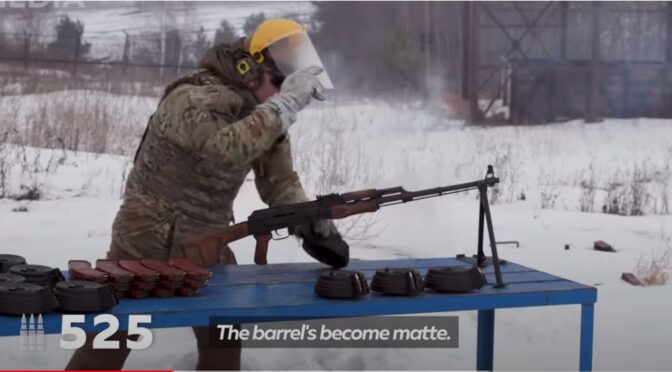 Ever wonder how long a heavy duty 1974 Russian RPK in 7.62×39 can fire almost non-stop until failure? Now’s your chance. This video features Georgiy Gubich firing in an episode of the Russian series Gunbusters firing an RPK as fast as he can doing drum and mag dumps on full auto. Yes, he’s wearing armor because he literally shoots it while it starts to burn an ultimately fails.

So you need to watch the video!!

You might be surprised by the seemingly fast failure of the rifle. Near the end Georgiy takes the RPK apart, notes what happened and points out that the problem for the rifle was the intense heat of the 75 round drums being dumped one after another. Normally you would fire a 2-1/2 30 round magazines and the pause in firing during reloads gives the barrel a chance to cool down plus practical applications aren’t going to see that type of sustained firing. One would assume that if all he had were drums that the RPK would have failed even sooner than round 1,232.

This was really a fascinating video to watch. Part of me really wants to bring that poor abused RPK home and repair it and part of me was interesting to see a video detailing testing to failure with this level of detail. A big thank you to Kalashnikov Group for helping put this video together.

Click on the following links for the associated webstore categories at Palmetto: