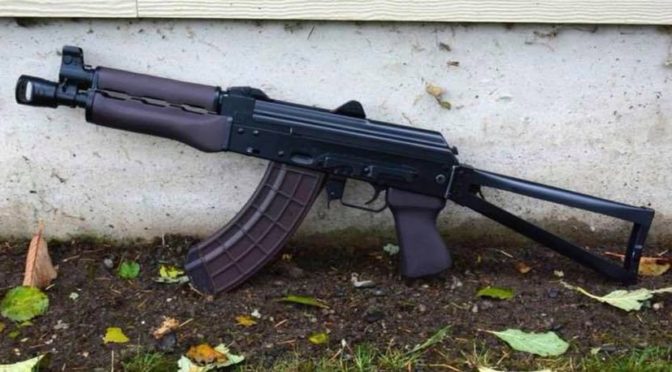 Art shared this photo of his custom M92.  I think the plum furniture really complements his SBR. 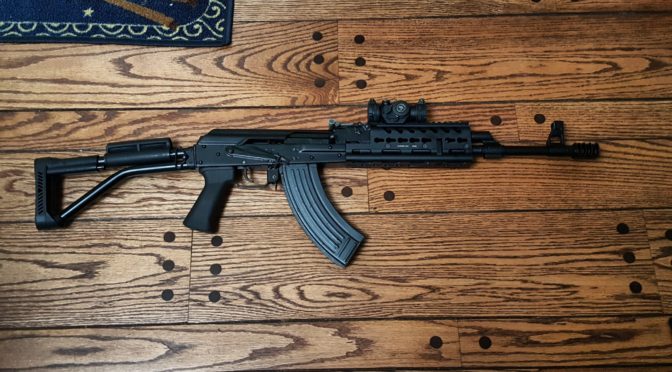 When the government announced they were going to ban the further import of Molot firearms, I jumped and bought one of the Fime FM-AK47-21 side folding AK-47 Veprs. 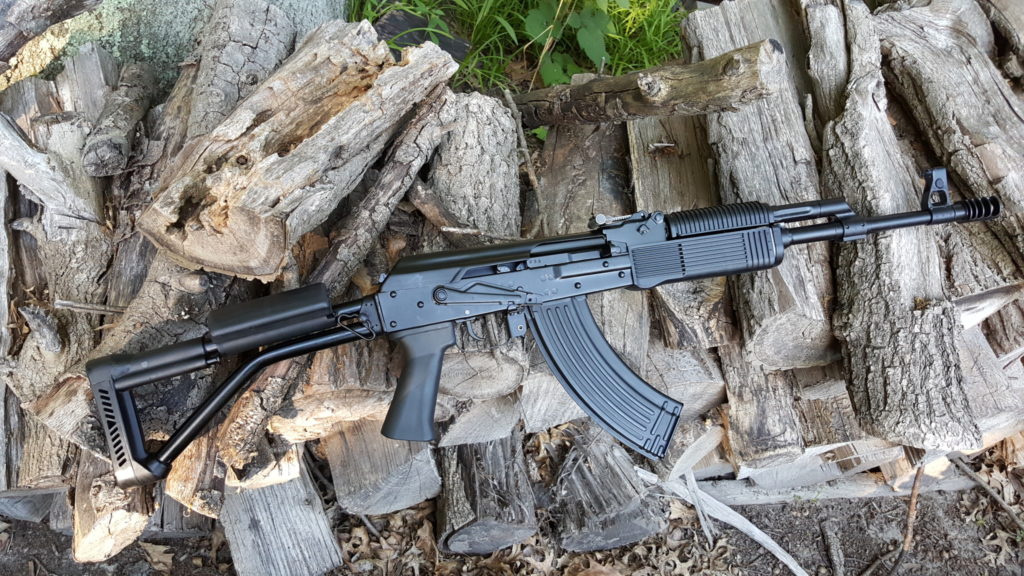 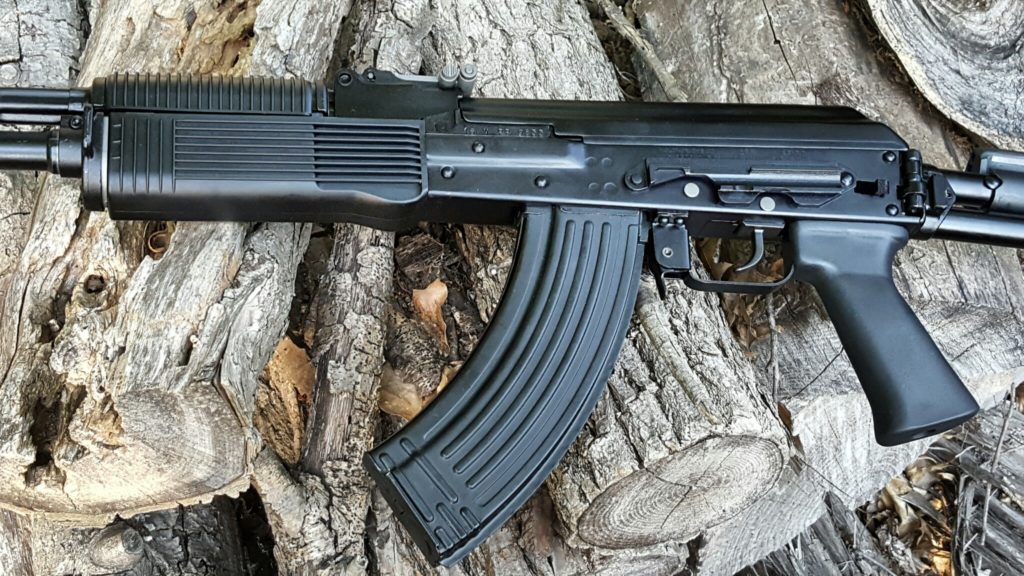 The rifle was absolutely awesome except for one regard – I really did not like the ribbed RPK handguard. Now this is the handguard on the Russian RPks and the ribs help with cooling and moving the hand away from the surface of the handguard — the design is genuinely thought out … but I do not like the feel. It’s as simple as that.

With that in mind, I started digging on options. On one hand I could make a new polymer set based on a mint RPK handguard set I picked up along the way. After a while, I changed my mind as the time and cost to create the molds didn’t make a lot of business sense as the Veprs weren’t going to be imported and demand would presumably be low and I would not recover the investment.

So, I researched other options and a firm I didn’t know much about kept popping up – Chaos, Inc. They made a well regarded handguard that looked great to me and reports on the feel and quality were very good. An important design point is that it connects like a handguard and doesn’t clamp anything on the barrel to transfer heat. That was a beef I had with the Midwest Industries rail design I tried years ago. It required the installation of a clamp on the barrel.

At any rate, I decided on the Chaos Apollo FM11L Keymod handguard. By the way, Chaos does not list on their website that this FM11L will fit the FM-AK47-21 side folder so I called them. The guy I talked to said they would take a return if it didn’t fit and I didn’t beat it up. I was pretty sure it would fit so I went ahead and ordered it.

The rail arrived about a week later and decided to install it when time permitted. The following is a quick overview of the steps required:

1] Make sure your rifle is unloaded! I can’t stress this enough.

2] Push in the dust cover retainer at the rear and remove the cover.

3] Remove the operating rod and the bolt carrier group.

4] You will need to rotate the gas tube retaining lever to remove the gas tube. Now this thing is on incredibly tight. I thought Zastava had very tight levers but they have nothing on Molot. You will either need non-marring pliers or a polymer or wood punch to swing the lever up clockwise until the gas tube assembly can lift out.

5] On the right side of the lower handguard retainer, you will see a small lever laying parallel with the barrel. It will need to be rotated 180 degrees towards the muzzle and this is another incredibly tight fit. I had to use stout needle nose pliers in order to rotate it. Once rotated, you can slide the handguard retainer forward. You may find you need to tap it a bit with a rubber mallet – I did. 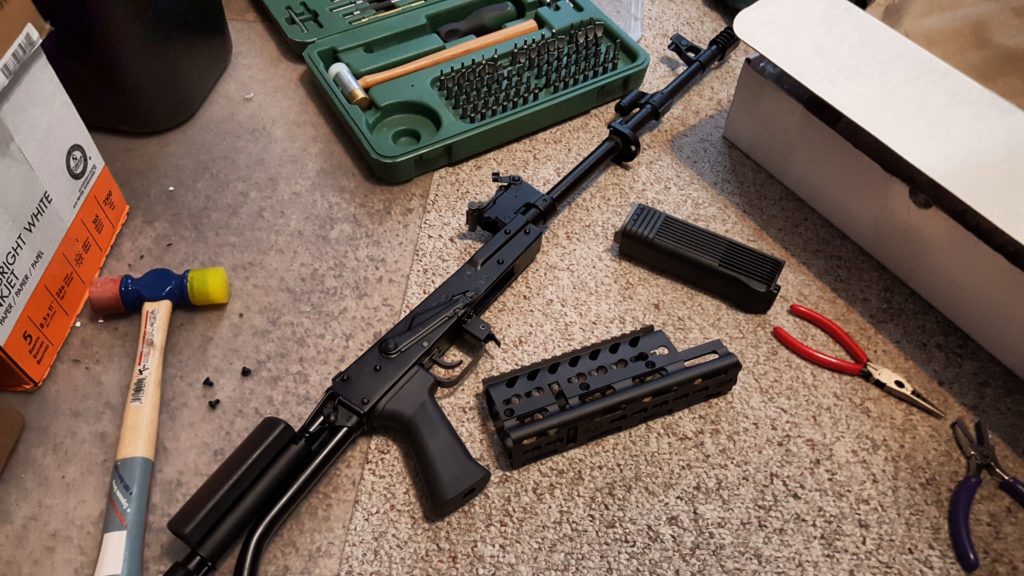 6] Now, you need to remove the gas tube cover and this is one of the questions I get asked most frequently. The cover is a semi-circle and rotates out of the semi-circular shaped retainers. Clamp the forged steel end (not the tubular end or you will crush it) and firmly rotate the cover. You may find it turns easier clockwise or counter-clockwise and either way is fine. Rotate it 180 degrees either way and then you can pull it away from the tube. 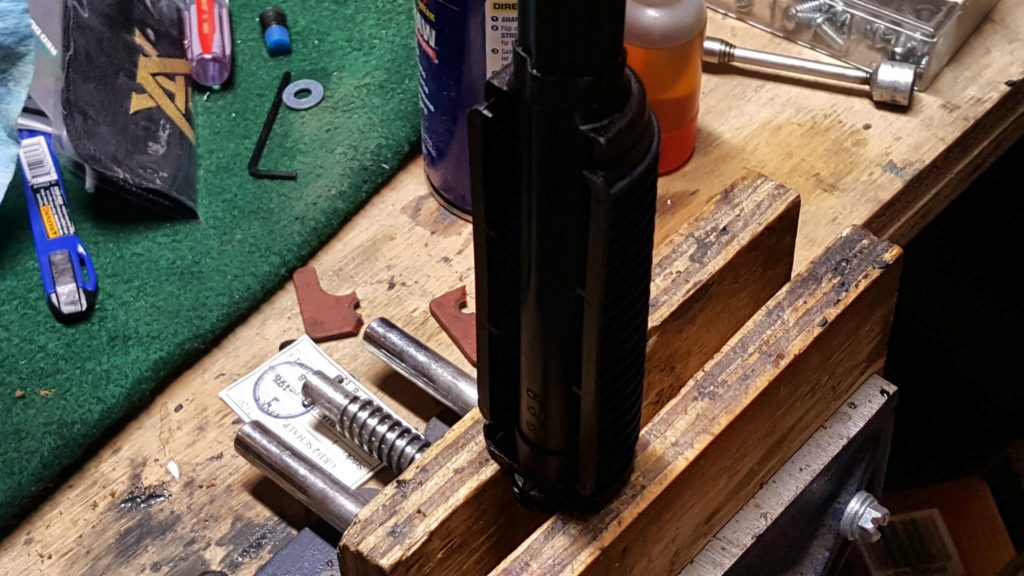 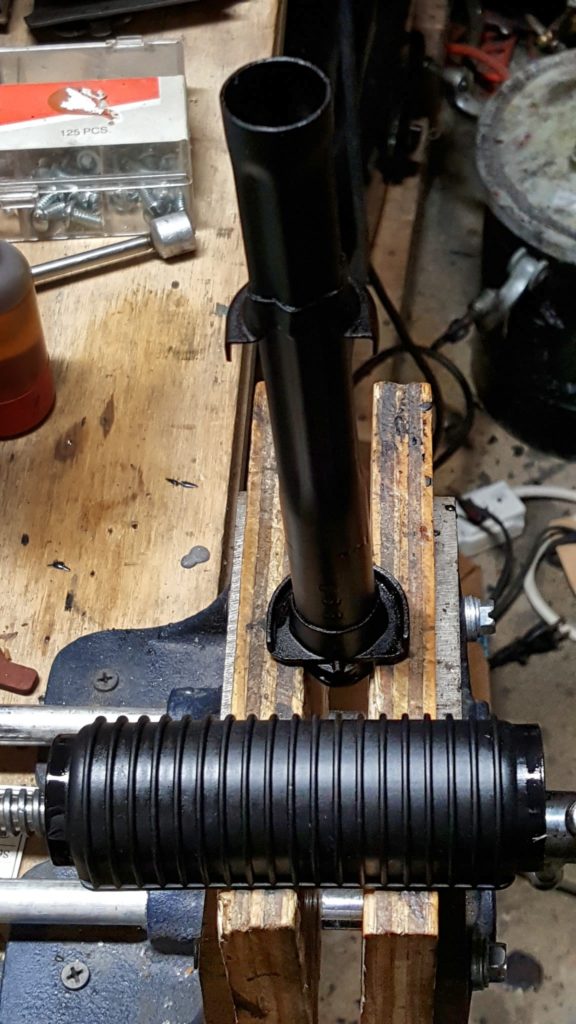 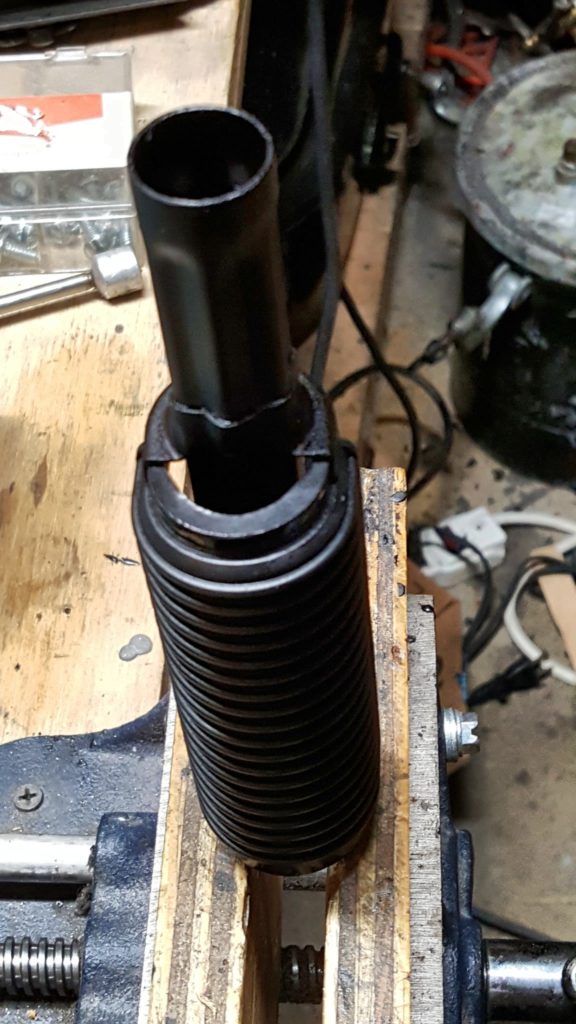 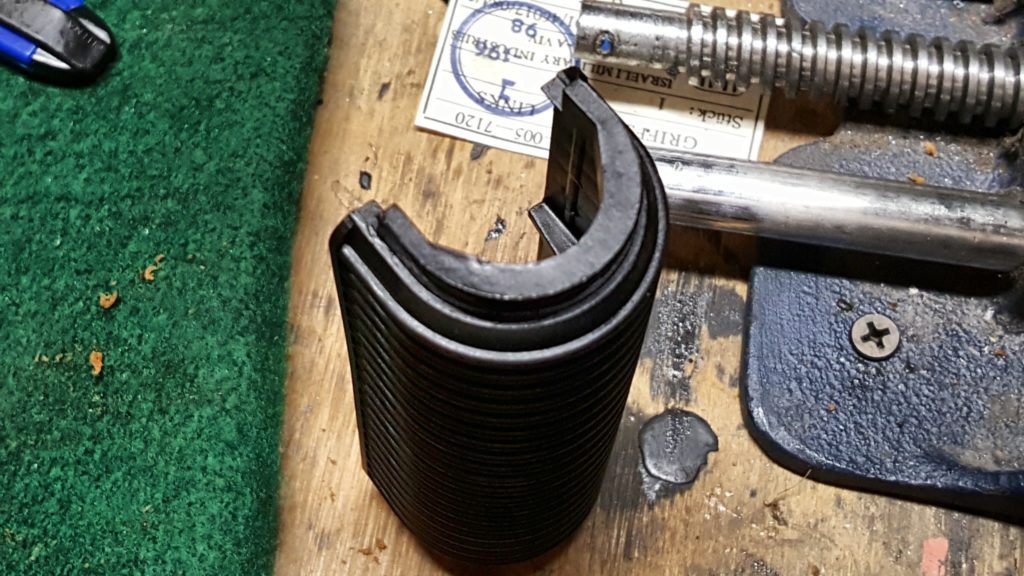 7] Next up is to install the Apollo FM11 lower. This is where their engineering prowess really shows. Their rail is two parts so remove the three hex screws from each side and set the upper half to the side for the moment. 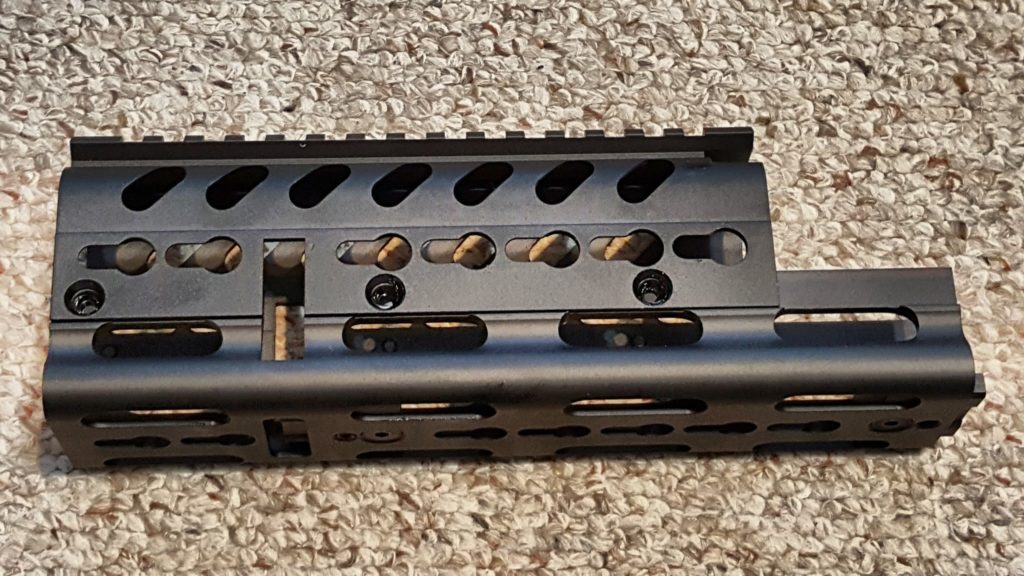 8] Now unscrew the bottom screws and slide the internal aluminum part backwards out of the way. This part will actually slide into the handguard retainer and lock the unit into place. This is why there is a slot for the retainer. Look at the fitment of the parts – they thought this out. Be sure to screw in the set screws also to lock things in place. 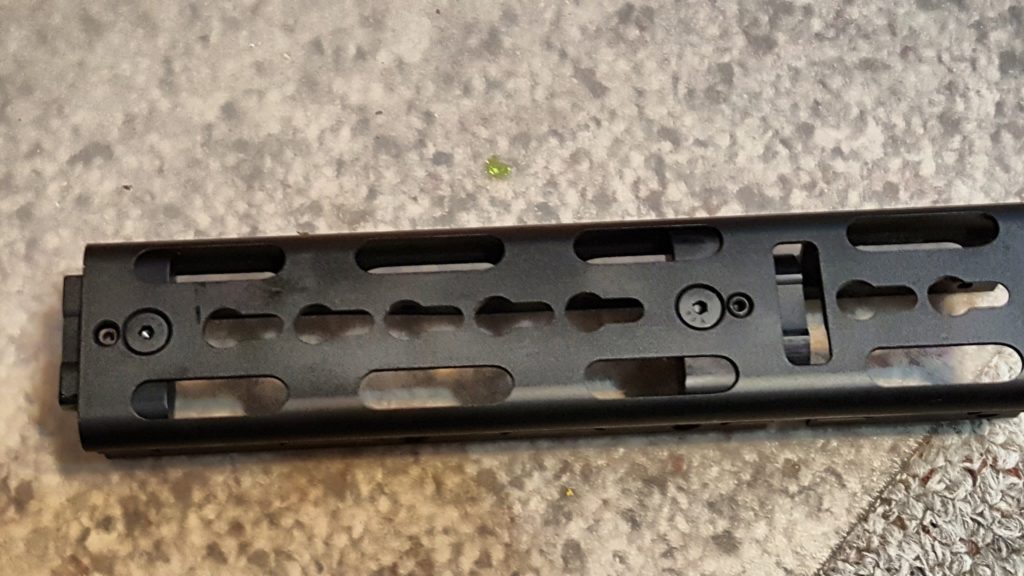 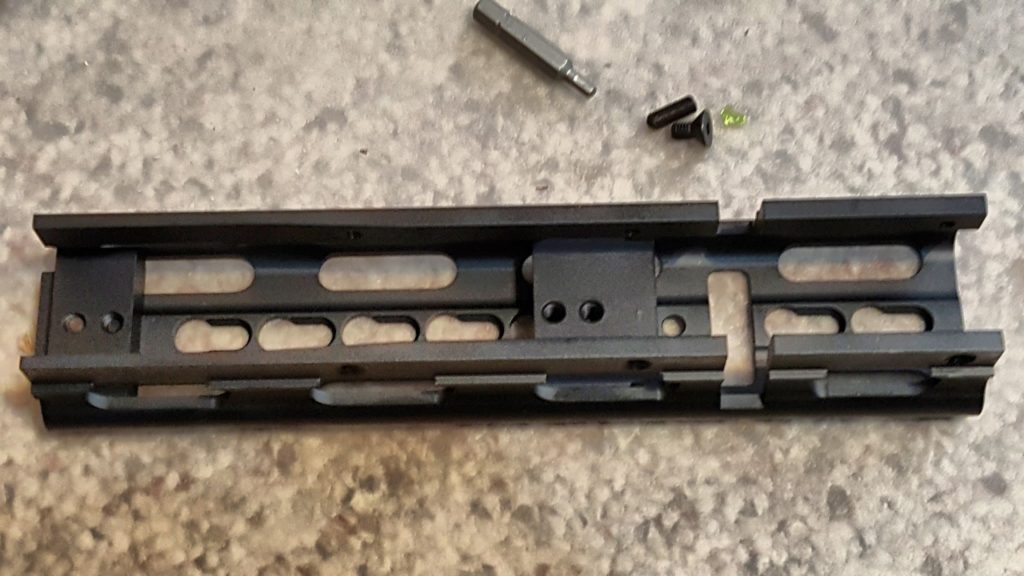 9] For the next part, you install the lower by putting the rear tab into the front of the receiver just the same as any AK-style handguard. Now the front requires you to get the retainer in the right place to nestle into the lower. Get the angle right and slide the internal aluminum retainer part into the handguard retainer and screw the internal part back together. The angle must be right so if you can’t get that internal insert to slide into place, move the handguard’s front up and down until it does. Then swing the handguard retainer lever back into position – it will be a tight fit so tap it into place with a rubber mallet. It would not take a ton of pressure – if it does, check fitment. Over the years I have read guys put a ton of pressure on the levers and snap them – the pressure required is firm and you should see movement as you tap the lever into place. They key is tapping and not trying to do one big “mongo smash” hit to rotate the lever. Once done, the lower should be absolutely rock solid – mine sure is. 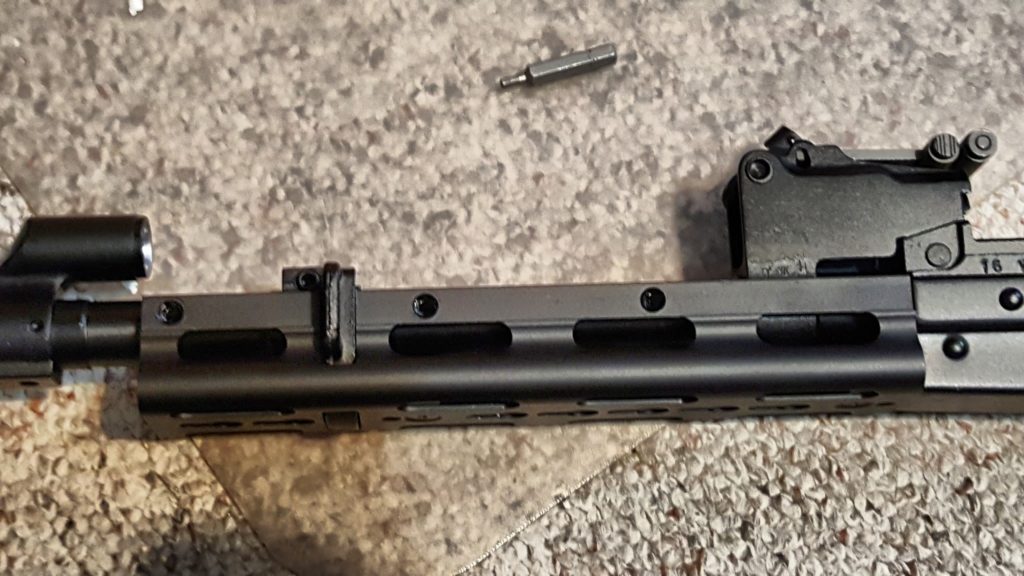 10] I then installed the gas tube. Nothing attaches to the gas tube so you can remove or install it as needed. I then used my rubber mallet to tap the catch lever back into position. 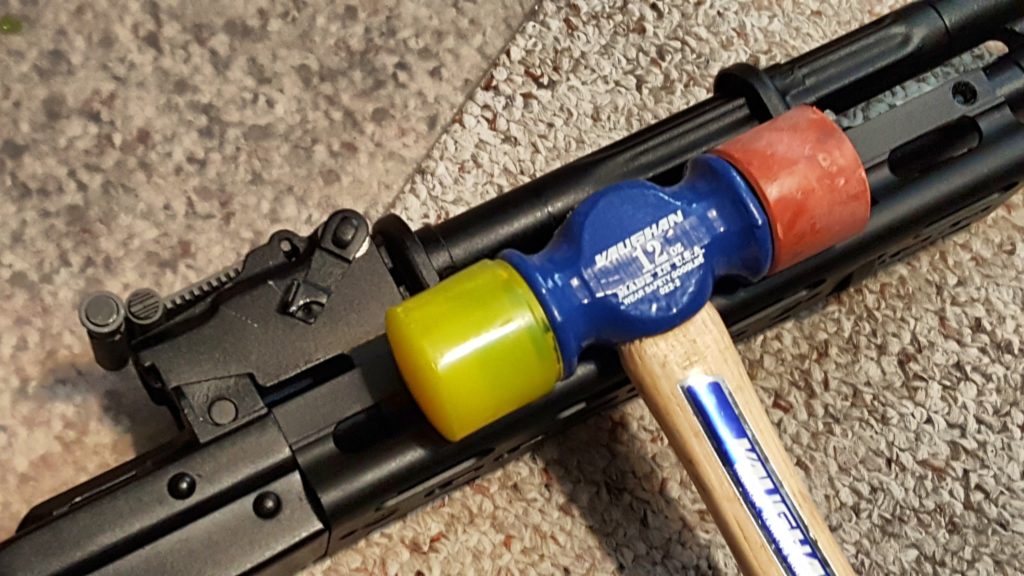 11] I then installed the gas tube cover by lining up the holes and installing the screws. 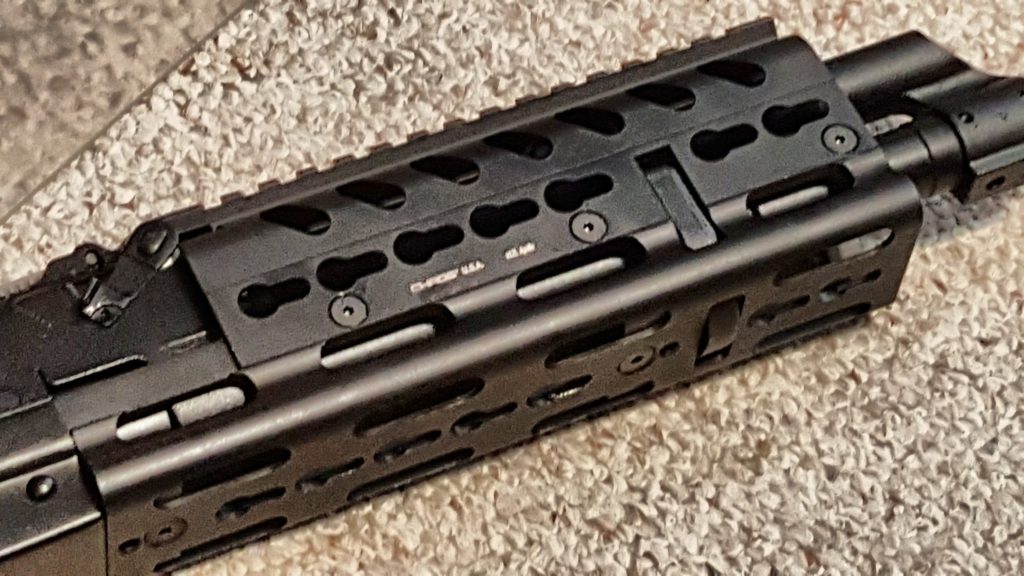 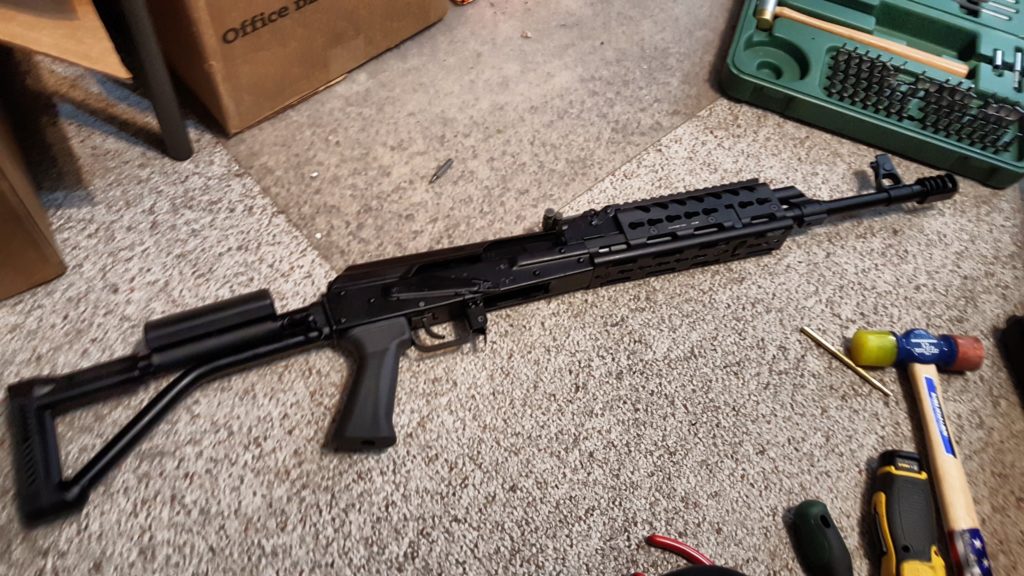 At this point it is done. I installed a Vortex Sparc II nice and low on the rail. I like the cheekweld when I rotate the cheekpiece into position. It does NOT co-witness with the iron sights but I really didn’t care about that – I can remove the sight real fast if I ever need to.

I really, really like the fit and feel of this rail. My side folder can lock folded. I did not need to change anything to support the folder.

Here is the end result: 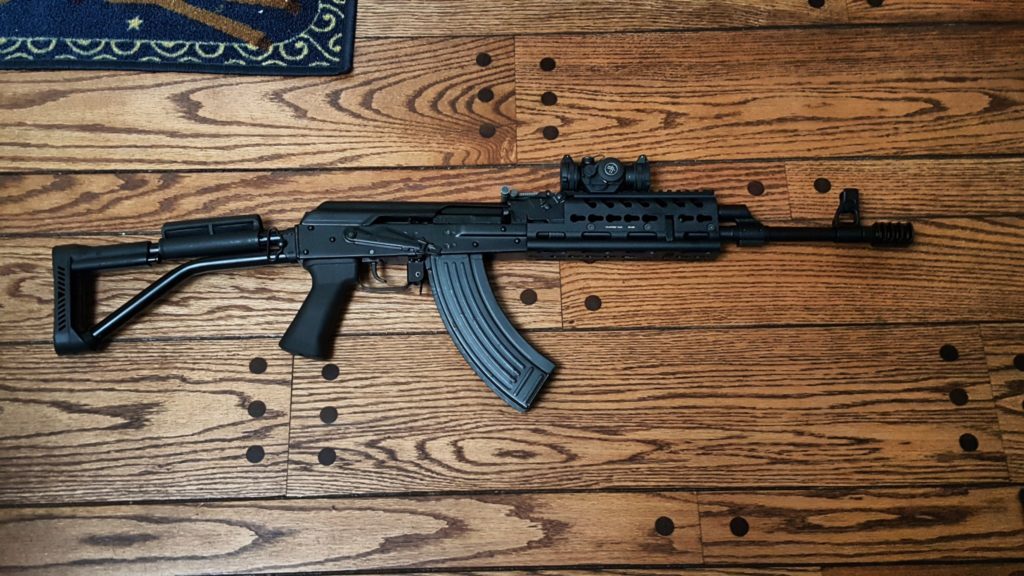 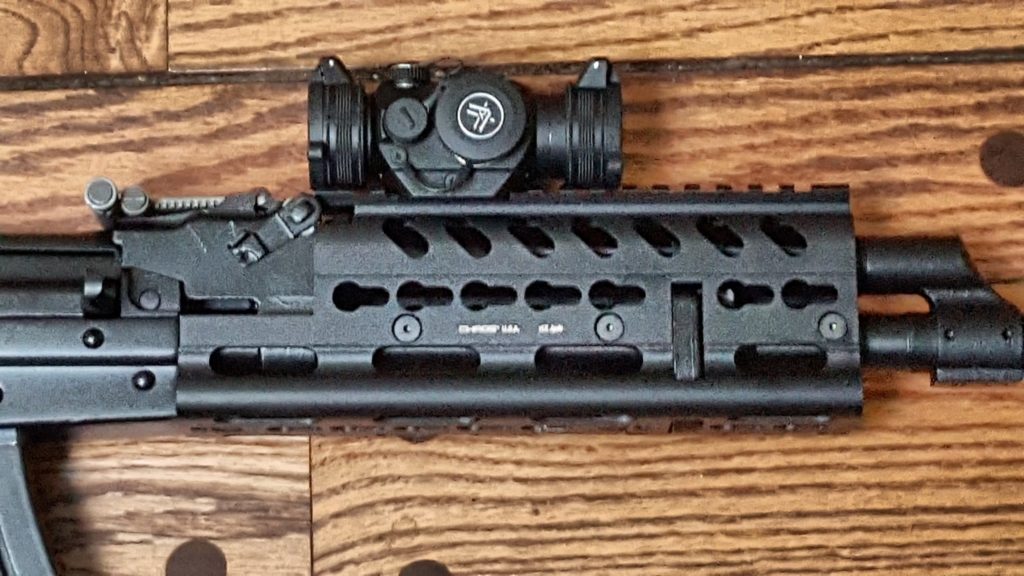 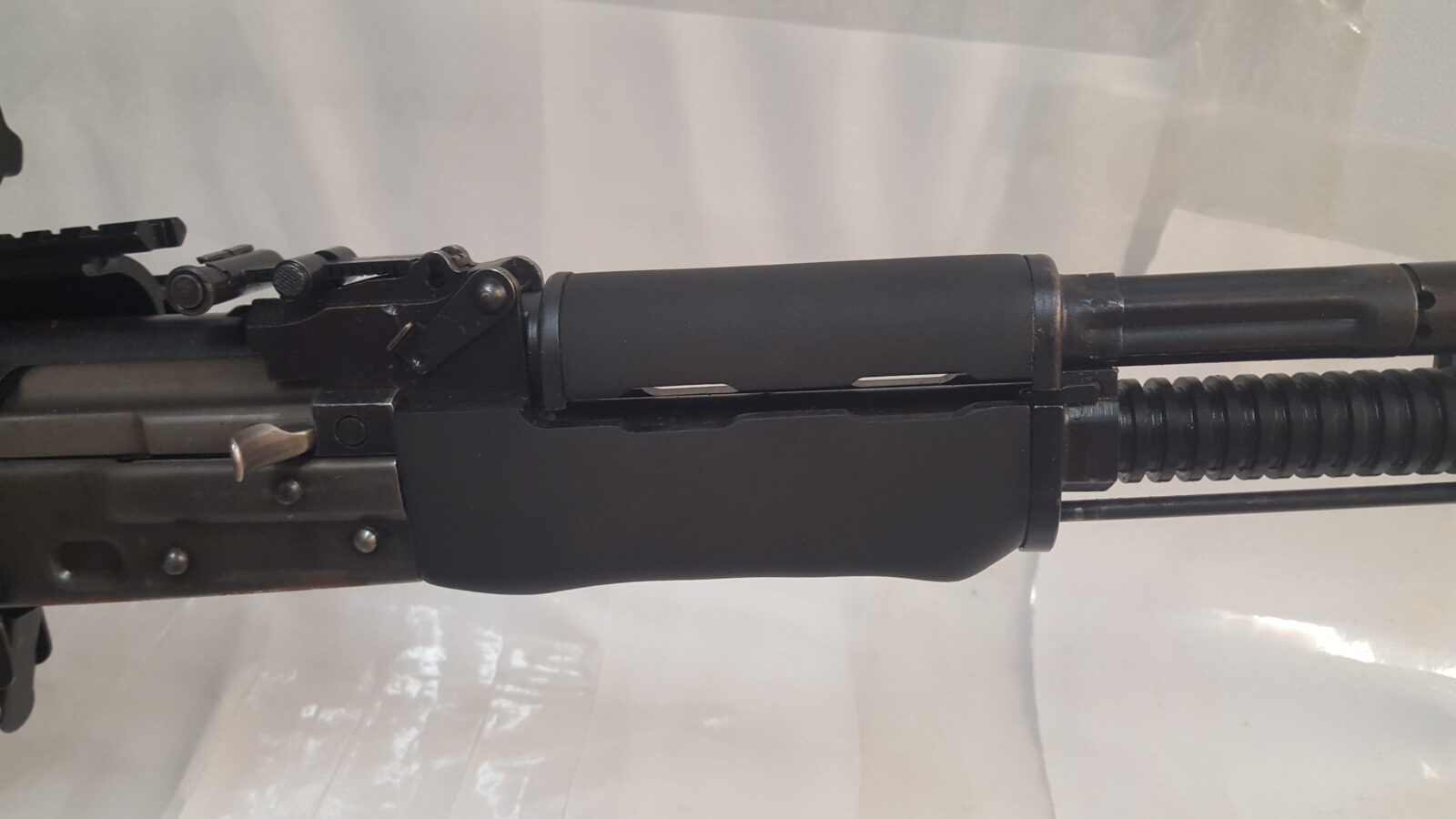 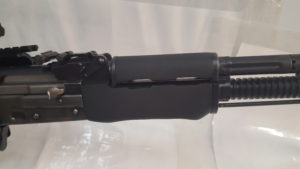 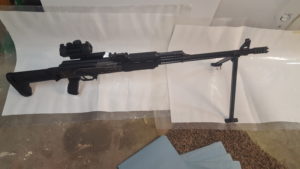 Click here to visit our M72 handguard page in our store.